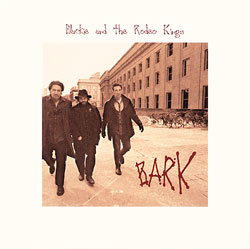 BARK marks the highly anticipated return of the JUNO Award–winning supergroup Blackie & The Rodeo Kings — Stephen Fearing, Colin Linden and Tom Wilson, who together in late 1995 formed the band as a tribute to the much respected but little known Willie P. Bennett.

Their newest effort finds the band maturing musically. Whereas the previous two albums contained a large number of covers, BARK features 12 original songs. Arguably some of the best material that these three talented songwriters have ever put to disc can be found in such stellar tracks as “If I Catch You Crying,” “Stoned,” “Had Enough of You” and “Jackie Washington.”

Recorded in the winter of 2003, BARK captures the feel and energy of the band and offers the listener a deep well of great songs that they can go back to again and again.